Challenge of the customer

The employees of one of the leading German insurance companies, Provinzial Rheinland Versicherung AG, work with highly sensitive data on a daily basis. The equipment, tools and solutions used must therefore be able to withstand the highest data protection standards and tightened IT security guidelines.

In 2017, the company wanted to expand the mobile working options of its employees and equip additional office staff with mobile devices. At that time, the insurance company was running an HCL (formerly IBM) Domino server environment. At that time, Provinzial had already tested and compared several device management solutions according to their requirements and in terms of their fit into their IT environment. As a result, they chose BlackBerry® UEM to manage the 600 or so BlackBerry devices at the time – combined with the BlackBerry® Dynamics container solution.

At that time, BlackBerry’s hardware production had been discontinued, so the insurer decided to switch to devices with a different operating system. Due to increased security functions, reliable hardware and the associated low support effort, the choice fell on the use of Apple devices.

At the same time, challenges had to be implemented. Problems arose in the environment of the container solution BlackBerry® Dynamics used, as this solution is designed natively for an Exchange connection and is geared to its functions and interfaces. For the connection to the HCL Domino Server of Provinzial, the use of a 3rd party solution was therefore necessary. Complications arose time and again in the former versions of the integrated solution from GENOA (Transformer) in combination with the BlackBerry configuration used at Provinzial.

The BlackBerry® Work App, which is responsible for PIM synchronization, also repeatedly encountered problems in practice: unavailability of the Container App, synchronization errors or the blocking of user accounts.

The management functions of BlackBerry® UEM in combination with the Dynamics Container solution in an HCL Domino infrastructure had to be adapted to the specifics of iOS devices in the best possible way. The then imminent European Data Protection Regulation (GDPR) and the security standards required by the industry brought additional requirements.

The EBF and Provinzial Rheinland look back on a long, joint partnership over several decades, during which the EBF was continuously responsible for the operation of the HCL Domino server environment. Thus, EBF already had many years of experience regarding the specifics of Provinzial’s IT infrastructure and had also proven its profound expertise in the field of HCL Domino. Since EBF also brings extensive know-how in the area of BlackBerry infrastructure and has an excellent knowledge of Apple technologies, it was the ideal partner for Provinzial Rheinland for this project as well.

By optimizing and further developing BlackBerry® UEM for the administration of Apple devices and the smooth operation of the container solution BlackBerry® Dynamics in combination with the HCL Domino environment, EBF was able to meet the requirements of the insurance company very well. Thanks to EBF’s close contact to the manufacturers, the functionality of the solutions could be significantly expanded and the insurer’s pain points could be resolved.

With around 1,300 devices, Provinzial’s employees are now well prepared for the requirements of a digital workplace and can work both securely and productively.

01
Analysis of the existing UEM configuration

In the first step, EBF colleagues analyzed the installation of BlackBerry® UEM in detail and identified various areas of optimization.

In addition, the EBF consultants worked out additional functions of the UEM that had not yet been used, but which could provide the insurer with significant added value, for example in terms of user convenience and IT relief.

At the customer’s request, a staging environment was also set up so that various configuration parameters and their effects could be tested in advance.

02
Optimization of the BlackBerry® UEM

The colleagues from EBF have restructured the company’s app landscape. The app configuration and the later distribution of apps to authorized users could be done much more automated and faster. The administration of complex employee and device groups was also significantly simplified, which also optimized the onboarding process of new users.

In addition, the standard company apps and the container solution were designed in the corporate design of Provinzial Rheinland. In addition to productivity, this also increased user acceptance.

In addition, the configurations of the single sign-on options in the back end were fundamentally revised. This was necessary because the previous settings caused the recurring blocking of user accounts. Furthermore, the login to the user self-service and also to the admin console was automated and personalized.

The systems used (BlackBerry® UEM, the BlackBerry Enterprise Mobility Server, as well as the Domino & Traveler servers) were also adjusted according to the number of devices and users. Through the adaptation, the operation could be stabilized significantly. In addition, the EBF experts introduced the “Direct Connect” function into the existing security infrastructure. This helped to increase the performance of the container solution and optimize its synchronization. Users can now access files again without delay.

Furthermore, the customer’s public key infrastructure was connected at all relevant points. These replaced the certificates of the BlackBerry standard installation and were sent to the end devices. This enables a uniform configuration of the server components and devices with regard to the connection to the company network.

First, the EBF colleagues conducted a detailed analysis of the existing configurations of BlackBerry® Dynamics and the associated GENOA Transformer.

Based on the results, the EBF consultants optimized the settings of the Kerberos authentication service and the interfaces of the HCL Domino Server. Thus a reliable synchronization of the BlackBerry® Work App was achieved and the connections were stabilized.

The EBF team also shared the results of the analysis with the manufacturer of the third-party solution so that they could be incorporated into an improvement of the product.

EBF ensures a smooth operation of the solutions and supports the Provinzial Rheinland by telephone with 2nd and 3rd level support. EBF’s services relieve Provinzial’s IT department, which can concentrate on its core tasks.

In addition, the EBF also provides Provinzial with ongoing strategic advice through a permanent team of consultants. Together with Provinzial’s IT team, the EBF colleagues work to continuously optimize the use of the BlackBerry® UEM and put new functions into operation. For example, the new iPhones SE with Apple DEP are currently being automatically rolled out to employees.

Provinzial especially appreciates the flexibility of EBF. The Provinzial team can rely on the fact that even short-term inquiries are answered competently and quickly by the EBF colleagues. A great added value that allows the insurer to act agile.

We reacted quickly and competently to a wide variety of challenges. Even after the completion of the project,  EBF is a reliable partner in the daily work”. Gerhard Schmidt, Workplace Management Provinzial Rheinland AG.

Provinzial Rheinland is one of the leading German insurance companies and is the market leader in its field. It insures private customers in the areas of car, liability, household contents or residential building insurance. Among the customers also enterprises from industry, trade and services as well as municipalities over 2.100 full-time employees in the Duesseldorf head office and more than 1,300 insurance specialists in over 600 offices as well as 41 savings banks active in the insurance business engage themselves for approximately two million customers in the administrative districts Duesseldorf, Cologne, Koblenz and Trier. With almost 6 million insurance policies, Provinzial generates annual premium income of over 2.7 billion euros.

Want to find out more?

Contact us if you want to learn more about our Digital Workplace solutions. We will be happy to advise you and provide you with an individual offer. 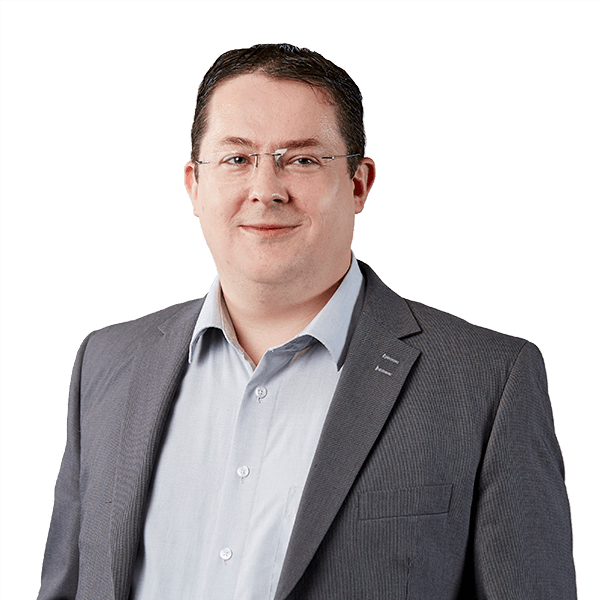 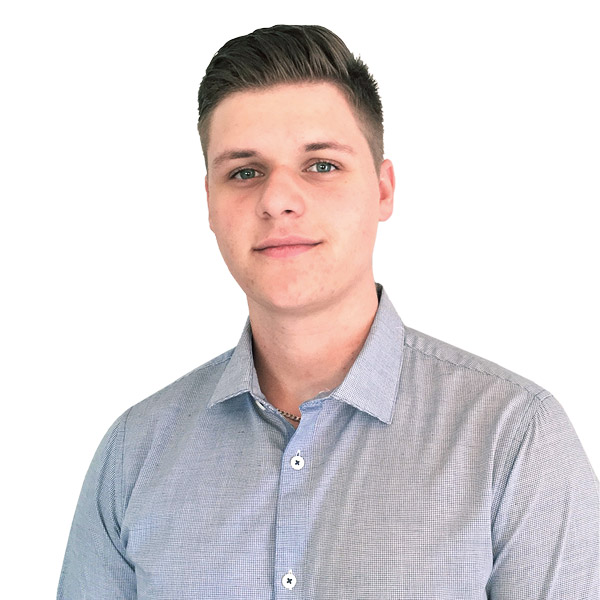 How was your application process?

My application process went smoothly. Two days after sending my application, I received an invitation to a meet in person.

The interview focused on my skills and personal interests. During the interview it became clear that the EBF attaches great importance to the further development of its employees and actively promotes this.

I was accepted the following day. I received the employment contract first by email and then by post.

Why did you decide to take this job?

For my career start after my apprenticeship, a secure job with good future prospects was important to me. EBF is a company that develops forward-looking ideas for the future of the Digital Workspace.

In addition, I can combine my personal interests, such as enterprise mobility and security topics – especially in the Apple context – with the professional requirements. Not only does EBF enable its clients to work with state-of-the-art technology, but also its employees. So we can choose between a Windows notebook and a Macbook or an Android device or iPhone.

Due to processing complex requests from different customers, no day is like the other.

When I’m not working at the customer’s site, I work in our office and receive the requests by phone or via our ticket system. Usually our customers have questions about existing systems or the implementation of new services. Of course, troubleshooting is also one of my tasks.

On site, I support our customers in implementing complex Mobile Device Management solutions, hand them over to the customers’ administrators and conduct training courses.

What is the great thing about your job?

The great thing about my job is the combination of a young and dynamic team and the daily changing tasks and challenges.

The opportunity to work on site with different customers allows me to get to know different working environments and to constantly expand my knowledge. This is complemented by extensive training opportunities, which are offered according to requirements.

What challenges does your job entail?

Since I work in an agile environment and customer requests vary greatly, I have to be able to react flexibly to them. It is important to be able to remain calm even under pressure.

What makes your team special?

The special thing about our team is that we are all experts in our fields. This means that if you have questions, you get quick help and can learn from each other.

From the first day of work you belong to a team you can rely on 100%.

Why does your employer suit you?

At EBF I appreciate the transparency and honesty that is reflected in the management style of my team lead. Appreciation and flat hierarchies characterize the working environment and make the EBF an attractive employer for me.

Why do you recommend EBF as an employer?

EBF offers secure jobs, as technology in the IT/enterprise mobility industry is constantly evolving and more topics are added.

Flat hierarchies mean that you can decide a lot yourself. This shows that you are not only working for the company, but that you are actively involved in its development and further growth.

In addition, the cohesion in the teams and in the entire company is promoted. For this the after-work beer on Fridays is helpful 😉

What did you learn in your first weeks at EBF?

My job at EBF is the first one after my apprenticeship. Therefore, the first weeks were focused on correct communication and dealing with customers as well as on familiarizing myself with the Digital Workspace. At EBF it is important to show initiative and to learn new topics independently. Naturally, support is always provided by experienced colleagues.

What else would you like to see from EBF?

That the future and the vision of the company continue to grow and that the “start-up” character with the flat hierarchies will be preserved.